There’s no doubt about it—Cade Dugan has a magic matchmaking touch. Every time he’s made figurines of mates for local residents of Holly for his ceramic Christmas village they’ve arrived as depicted. His problem is the figure of the woman in the blue coat he made for himself, because women swoop down on Holly, determined to be The One, the minute they hear about it.

Egypt’s had great luck with men—all of it bad. Every time she introduces her guy to a friend, she ends up being a bridesmaid instead of the bride. She’s on her way for the fourteenth outing—her sister’s Christmas Eve wedding to Egypt’s last boyfriend—when her car conks out near a tiny village full of more Christmas cheer than she can stand…and a gorgeous hunk in a sleigh, drawn by a team of reindeer, who is clearly a complete nut job.

A complete nut job who makes her tingle all over, and who is fated to try to kill her three times before he can claim her forever.

Autumn leaves aren’t the only thing stirring in Pumpkin.

Avalon Lynch has worked hard to escape her witching heritage. Everything she’s ever wanted is within her grasp, until a visit home and a mishap with a skeleton binds her to an offspring of The Dugan, Pumpkin’s equivalent of the boogeyman.

Nicholas Dugan loves autumn–the changing leaves, the ripening harvest, the tricks played on Pumpkin. But a sinister Prankster pairs him with a sexy witch, and reveals his family’s dark past and their cursed future.

The question is which is harder to survive–the danger from the Prankster or his desire for his bewitching partner? 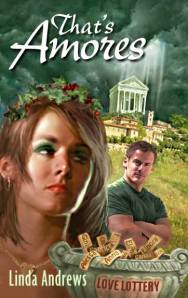 Love flies with the speed of an arrow.

How’s a girl supposed to stay single with the entire town wants her married?
Alessa Lombard has a plan to avoid the marriage trap. It’s not that she’s opposed to marriage—wedded bliss is fine…for other people. All she needs is the help of the town’s newest bachelor to help pull off a fake romance, and the family curse won’t have a chance to ruin her life.

Determined to fall in love, Sloan Dugan immigrates to the magical town of Amores. Surely, in a town devoted to love, he’ll find a woman who doesn’t use trickery and deceit.

But Cupid has other plans. Alessa and Sloan will find themselves playing the game of love whether they want to or not. Will winner take all? Or lose everything?