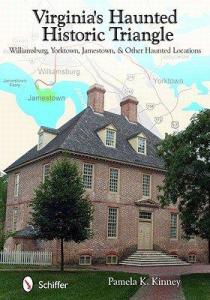 “By the pricking of my thumbs,
Something wicked this way comes.
Open, locks,
Whoever knocks!”
William Shakespeare

Ghosts are among us. Most of then living go about their daily business, unaware or not believing that loved ones and even those they never knew, haunt the spaces they work, play, and even just relax in. Not just haunted houses or castles as is the tradition of fictional ghost stories, but even their own modern homes and offices. Battles go on in both Revolutionary and Civil War battlefields in the United States, and in other countries, like Europe, battles from the World Wars back to the dark Ages still happen.

Why? Are they lost souls who need help to get to the “Other Side?” Or residuals that repeat over and over like a time warp? Many are residuals. But many are intelligent hauntings, angelic visitations, and demonic presences. A friend of mine, Jackie Tomlin, who heads the Central Virginia Paranormal Investigations, was asked at a Ghost Hunting 101 class has she ever asked if the spirits wanted to be helped from this world to the next one? In all the EVPs they’ve gotten, the answer has been “No!” So, in my opinion, I think many of our relatives and those before them, come back and forth easily, revisiting places they knew in life. Revisiting us. Kind of like a vacation from the other place.

Whatever the case, reading books about phantoms, and even watching the reality shows about paranormal investigators or the paranormal stories fascinates us today. We all want verification that there is life after death. That our loved ones are happy. And be honest, it brings a chill up your spine, doesn’t it?

I am going to share the book blurb and a chapter from my upcoming nonfiction ghost book, Virginia’s Haunted Historic Triangle: Williamsburg, Yorktown, Jamestown, and Other Haunted Locations, that will be released later in July 2011. Enjoy, and happy haunting. . .

Take a step back into ghostly history as you tour Williamsburg, Yorktown, and Jamestown in the Historic Triangle. Visit Jamestown Island where Captain John Smith and the first English colonists settled. Stroll around Yorktown and follow the same footsteps of Thomas Jefferson and George Washington as they walked along Duke of Gloucester Street. Hear odd noises and see apparitions at the Peyton Randolph House, Cornwallis’s Cave, Wells’s Corner, Sherwood Forest, the Rosewell Plantation, and many, many other places. Be prepared to get to know the ghosts of this Historic Triangle and its surrounding areas. They’re dying for you to read their stories.

Josiah Chowning opened his tavern in 1766. He wanted to appeal to the ordinary people.
Except when Colonial Williamsburg reconstructed this tavern in the 1940s, they assumed they were doing so on the right, original foundation, but it wasn’t. Instead the foundation belonged to a privately owned home. I learned this when I took the Colonial Williamsburg Tavern Ghost Walk.
Located on Duke of Gloucester Street next to Market Square and the Courthouse, the tavern allows casual attire and no reservations are necessary. Instead seating is based on space availability. There are ales and specialty alcoholic drinks that you can order besides fountain drinks and water; and besides sandwiches, light fare, stews, and desserts.
But there are more than sandwiches at this tavern. There are specters haunting within these walls. Things of an unusual nature take place at Chowning’s Tavern: furniture moving around, clothing of tourists being yanked on, and a little girl who appears and disappears.
Bill and I arrived early for the ghost tour to start, so we stopped at Chowning’s for root beer. Seated by the window, we watched a magician who came into the dining room to perform. I took a couple of photos of him. In one of them, I discovered what looked like an orb starting to form behind his head. Is this the ghost that uses the tavern for his stomping grounds?
Seven years ago, a woman was eating when the server approached her table, asking if she needed anything more. The woman looked at him and said, “I’m psychic. Did you know this tavern was haunted?” She gestured to the side. “Seems Peter told me he’s the one haunting it and he is very, very fond of a hostess named Emily that you have working here.”
When Lee, the server, admitted they had an Emily that worked as a hostess there, he went to get her, as the psychic directed. The woman stood with him at the table, not sure what was going on.
The psychic looked up at Emily. She told her that a spirit named Peter who haunted the place liked her. That he felt he was the protector of her and her newly born son who came too soon
This did bother Emily that the woman knew about her son who had been born a preemie. She glanced aside at Lee, but Lee told her he never said a thing to the woman.
“I don’t know how you knew about my baby, but I don’t believe in ghosts, Emily said. “I am not buying the Peter story.”
The woman smiled and said that was too bad as Peter really liked her. He even brought her a white flower yesterday.
Emily turned white as the flower. For when she had been seating some people in the gardens, she found a white magnolia blossom at her feet that hadn’t been there earlier. The thing about this is the nearest magnolia bush was two blocks away, by the Peyton Randolph house. No way for it to come from any flowering bush nearby—at least not on its own. The day after meeting the psychic, Emily quit.
It goes to show that a woman can have a male stalker—even if he is a ghost of a man from the eighteenth century!
The next time you need someplace to sit and relax, why not have a drink at Chowning’s. Let it be known, though, if you find a white flower at your feet . . . you may be the object of some phantom’s affections!

Be prepared to take a journey into Pamela K. Kinney’s fantastic dreams of horror, science fiction and fantasy, plus the ghosts and legends of nonfiction ghost books, Haunted Richmond, Virginia, Haunted Virginia: Legends, Myths and True Tales and soon to be released Virginia’s Haunted Historic Triangle: Williamsburg, Yorktown, Jamestown, and Other Haunted Locations.

Pamela K. Kinney is a published author of horror, science fiction, fantasy, poetry, and nonfiction paranormal books published by Schiffer Publishing. Her two nonfiction ghost books, Haunted Richmond, Virginia and Haunted Virginia: Legends, Myths and True Tales have been nominated for Library of Virginia Literary Awards. She has a new ghost book, Haunted Historic Triangle: Williamsburg, Yorktown, Jamestown, and Other Haunted Locations coming July 2011 and she just had a collection of short horror stories, Spectre Nightmares and Visitations, come out that is doing well.

She also has done acting on stage and in films. And is a Master Costumer, costuming since 1972. She has even done paranormal investigating. Find out more about her at: http://FantasticDreams.50megs.com and at http://www.SapphirePhelan.com for Sapphire Phelan.

She admits she can always be found at her desk and on her computer, writing. And yes, the house, husband, and even the cats sometimes suffer for it!
Preorder Virginia’s Haunted Historic Triangle: Williamsburg, Yorktown, Jamestown, and Other Haunted Locations at Amazon

Linda Andrews lives with her husband and three children in Phoenix, Arizona. When she announced to her family that her paranormal romance was to be published, her sister pronounce: "What else would she write? She’s never been normal." All kidding aside, writing has become a surprising passion. So just how did a scientist start to write paranormal romances? What other option is there when you’re married to romantic man and live in a haunted house? If you’ve enjoyed her stories or want to share your own paranormal experience feel free to email the author at www.lindaandrews.net She’d love to hear from you.
View all posts by Linda Andrews →
This entry was posted in Books, craft, Science, Writing and tagged Author Interview, Civil War, Ghosts, Pamela Kinney, US history, Virginia Haunted History. Bookmark the permalink.

2 Responses to Interview with Pamela Kinney