What prompted you to write that first book?

I’d started keeping a little file of notes on story ideas because I had the deep fear of losing a story. Every once in a while I’d read through them and remember what it was that I wanted to write, eventually, when I finally acted on this crazy, lifelong idea that I could be an author some day. I’m not sure I ever thought I’d actually do it, but I loved the stories. So, one time I opened that file and read through my little story seeds and realized that I had no idea what a few of them were talking about–even with the notation. It was horrible, the idea that I’d lost a story. I sat down and started writing almost immeditely, just to get them down on paper. I wanted to rescue them.

Did you always want to be an author?

Always, though I never was certain which I wanted more, to write or to paint. Some days I still wonder, but I learned in art school that painting every day makes me detest the artform. Being forced to paint, required to produce, completely kills my affection for the process. With writing, it’s always been the exact opposite. If you try to make me take a day off, I’m liable to bite you.

How do you decide which story to write?

I go on the advice that you write what is speaking to you the loudest at the time. It’s always seemed to work for me, but now, with series coming out and sequels needing to be delivered on something of a schedule, I’m learning to write more to a deadline. I work on the story that is “due” next, usually, but sometimes another project will insist on attention instead, and I tend to go with that when it happens.

Can you tell us a little bit about your latest release?

It’s sequel month for me. My Shift Happens series, which centers around a hotel for dimensional travelers, just saw book two, Aspect Ratio, released into print. Next week, book two in my Changeling Race trilogy, The Fly in Paradise, is coming out through Mundania Press. That series is urban fantasy and features the Fey races and the humans who interact with them.

What prompted you to write a book about Space Slugs?

I think it’s a Seattle thing. Really, I grew up in the Pacific Northwest, and slugs are sort of celebrated there. We have slug festivals, races, cookbooks…all in jest, of course, but the seed was planted. The actually tale sprouted from a single puppet I made a few years ago. I still have Neela, and her story and her friends just seemed to come along with the character.

You’ve went to a lot of effort to create the unique world in Space Slugs,
can we expect a sequel, maybe of her sister Zora?

Oh yes. Zora gets the next book, Slug Opera, and it is well underway. The rough draft of book two is posting as a web serial at: http://spaceslugserial.blogspot.com

Do you plot your stories out or do you just start writing? 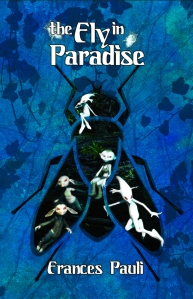 I used to claim I just started writing, and it definitely looks that way. In fact I do a great deal of plotting. It’s just that most of it happens in my head and not on paper. I’m learning though. I have started jotting things down, at least loosely, but I try to keep the plot fluid and ready to be tweaked or adapted to the moment. I write a little bit like I learned to paint, with a rough idea and willingness to let the process change it if necessary.

What was the funniest thing you learned about your hero/heroine from writing
their story?

Well, in Space Slugs, it was just how much like her sister Murray could be. She starts the series so uptight, completely frustrated by everything Zora does, but by the mid-point their simiarities are showing. The funniest bit? When she admits that she likes the little electric shocks from her macro-plankton friends. I think Zora put it best, “I had no idea you could be so kinky.” Well, Zora didn’t, and neither did I. Murray just blossomed a little as she got a taste of life outside her lab.

I am so much more of a Murray. If I have Zora tendencies, I keep them firmly under lock and key. . . That’s my story, and I’m sticking to it.

Can you describe your office or where you normally write?

I have two young children, and when I did occupy our spare room for my office, I never managed to get in there to work. So now I write from the dining room table. There’s a bookshelf beside the end where my laptop sits, and the three bottom shelves are my “office” area.

Which came first the plot or the characters?

Usually the characters. In Slugs, even more so. I have a few novels that started with a plot idea and just called for the right characters to fill that, but most of the time I come up with an individual, or a group of them, and then imagine what trouble they’d get into.

Have you ever gotten stuck while writing a scene or chapter? How did you
overcome it?

Oh yes. I’m actually chugging away on a novel at the moment, and it really wants to be difficult. I’ve tried about everything in those situations, but in the end, I think the key is to just keep writing. If you bulldoze past the rough spots, usually, the story will find you again. The worst thing, at least for me, would be to stop moving those fingers.

What is the wackiest thing that’s ever happened to you since you started
writing?

I think maybe the weirdest thing I’ve noticed since actually finishing a novel and writing, publishing, etc. is how many people, people you’d never have guessed, wish they could be writing a book. I’ve told old co-workers, strangers, store clerks, dental assitants and repair men that I’m an author and gotten that response. Oh, I have this book I’ve always wanted to write… I’m starting to think that everyone has at least one book in them, and the only difference is that actuallly sitting down and setting it on paper.

Did you do any research for you book and, if so, did you find any
interesting information that you had to include in the story?

I research some of my books, though so far, not terribly in depth. I have an idea for a WW1 historical romance, possibly my next project, and the impending research actually scares me to death. But for that one, it really needs to happen. On Slugs, which is in many ways a farce, I didn’t do one snit. Unless you count accidently stepping in a lot of slug slime as a barefoot little kid. That stuff does not come off, let me tell you.

Where can readers find out more about you?

I am on all of the usual places, facebook, twitter, myspace, all of which you can find links to at: francespauli.com
the website also lists my releases, upcoming and past, news, free stories and links to my current web serial, Slug Opera. I also blog at: francespauli.blogspot.com and like to poke around on goodreads as well.
thanks so much for having me for the visit!

Thanks so much for being here!

bio:
Frances Pauli writes Speculative Fiction with romantic tendencies. Her urban fantasy and science fiction series are published by Mundania Press LLC, and she writes cross-genre romance for Devine Destinies.
Her short stories appear in various online zines and both print and e-anthologies. She lives in Washington state.

Linda Andrews lives with her husband and three children in Phoenix, Arizona. When she announced to her family that her paranormal romance was to be published, her sister pronounce: "What else would she write? She’s never been normal." All kidding aside, writing has become a surprising passion. So just how did a scientist start to write paranormal romances? What other option is there when you’re married to romantic man and live in a haunted house? If you’ve enjoyed her stories or want to share your own paranormal experience feel free to email the author at www.lindaandrews.net She’d love to hear from you.
View all posts by Linda Andrews →
This entry was posted in Uncategorized and tagged Frances Pauli, Space Slugs. Bookmark the permalink.

2 Responses to Interview with Frances Pauli