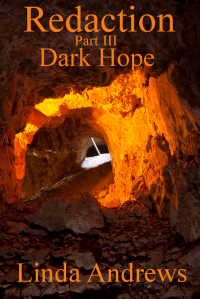 “You can’t go in there.” Manny pulled the storage door shut behind him. The latch clicked in place. He leaned against the door. No one was getting inside. He had to protect them and the Sergeant-Major.

Chef Bonnie’s lips quirked up. “Emmanuel, you mustn’t think to hog all the pomme du terre.”

“The what?” His heart rate kept time with the Geiger counter ticking in his hand. Radiation spilled out here. Here! He scanned the empty tables of the canteen. Thank God no one was about.

Nearly no one. He and Chef where both getting a lifetime’s dose. They had to leave.

“Potatoes, dear boy.” She shook her head and her chef’s hat tilted over her left brown eye. “Gracious, I knew the state of education was bad, but surely everyone knows a soupcon of French.”

With his free hand, he fumbled with the latch, hooked the lock through and pinched it closed. There. Safe and secure. He turned to double-check and tugged on the lock. Closed.

But that hadn’t stopped the bad guys the last time.

His tongue swelled in his dry mouth. Whoever came in must have a key to the door. He’d have to talk with the Sergeant-Major about changing the lock when he came back.

“Emmanuel, what are you doing?” Chef Bonnie’s voice rose on the last word. “Everyone is expecting potatoes. Locking them up will only upset those people.”

Raising his hand, he flashed her the Geiger counter’s readout.

Bonnie paled and raised her hand to her throat. “Oh! Oh my! Is that real?”

Real? Manny shook his head. Maybe it was the language barrier.

“Them? Who is they?” The skin puckered between her pencil thin eyebrows.

“The military, er, security.” Hooking his arm through hers, Manny tugged her toward the kitchen. The counts slowed to intermittent beeps. Maybe things weren’t so bad in here. “They have to be notified that there’s been a breach.”

Skipping at his side to keep up, Bonnie glanced over her shoulder. Her eyes widened as she stared at the metal storeroom. “Oh my!”

He steered her around the serving counter and released her. The ticking stopped. Could the radiation have died away. Glancing down. Three red zeros preceded the seventy-eight. His knees wobbled. Oh God! Had it spun more than a hundred thousand and started again?

That was lethal wasn’t it? He was going to die.

“Emmanuel. Emmanuel!” She snapped her fingers in front of his nose.

Bonnie wrapped her hand around his wrist and gripped the Geiger counter with the other. With a twist, she pulled it free. “Get to the infirmary.”

He stared at his palms before sweeping his thumb over his fingers. Nothing. He felt nothing. Was this the beginning of the end? “The infirmary.”

“Yes.” She set the instrument on the serving area.

“Don’t!” He lunged for it, scooped it up and held it to his chest. “You’ll get everyone else sick.”

Radiation was contagious. That’s why those who had a nuclear tan had to be separated from the rest and buried far away.

“Emmanuel.” She breathed slowly. “I need you to hand me the machine.”

Her eyes narrowed and her lips thinned. “Then you’re getting sicker by holding it.”

It slipped through his fingers and crashed to the floor. The battery cover popped off and skidded across the stone to stop near the stove.

“NO!” He slammed his fist into his forehead. How could he be so stupid? Now he just contaminated the kitchen.

“Emmanuel.” Bonnie latched onto his neck, her fingers dug into his flesh.

Pain skittered down his spine. He raised his shoulders, but the ache pulsed through him. Maybe he could drop free. He bent his knees. She held on like a starving leech. “Ow!”

“I know it hurts, Emmanuel. But you’re beginning to panic and I can’t have that in my kitchen.” With her Vulcan death grip, she steered him along the back of the serving counter toward the exit.

He stumbled along on feet like wooden blocks. Tears burned his eyes. “I won’t panic. I won’t.”

“That’s good.” With a sigh, she released him.

He danced out of reach and rubbed her gouge marks from his shoulders. Damn, she was stronger than she looked.

“I do so abhor violence. It is the refuge of the crudest orders, don’t you think?”

“Sure.” He’d agree to anything so long as she didn’t unleash those pinchers again. Skirting a row of tables and chairs, he reached the archway dividing the dining room from hallway.

She grinned. “Now please visit the infirmary. I’m just getting you trained the way I like and can’t have my prep assistant falling ill.”

He tucked his hands into his army pants pockets. “But what about the counter?”

“I’ll take care of everything.” She reached out to him.

He ducked her touch and stumbled into the hallway. No way would she touch him again. He’d seen the movies where people had been paralyzed with just a touch. “I’ll tell security.”

The Sergeant-Major was outside. He might need backup. Manny couldn’t let him down. The guy had saved him and his new family.

“Don’t be silly.” Bonnie wagged her finger at him. “You will march to the hospital and concentrate on staying healthy. I will not have you undergoing some rubber-hosed interrogation while you are sick.”

Rubber-hosed interrogation? The Sergeant-Major and his men had given him food, looked out for him and buried his friends and family. He owed them. Everyone in these caves owed the soldiers. “Things aren’t like that here. The soldiers–”

“Do not argue with me, young man.” Red spots floated on her cheeks and she planted her fists on her hips. “You will rest and recover, or you will not work for me again.”

“You can’t mean that!” All he’d ever wanted to be was a chef–to serve great food to those he loved.

“Then you will cease this…” she waved her hands between them. “…insubordination. Once, you are declared fit, the powers that be can talk to you, but not before.”

He swallowed his reply. The wad nearly choked him.

“Many people depend upon you, no?”

“Yes.” He had lots of family counting on him. Including a few who tried to boss him around for his own good. Including a few he tried to boss around to keep them safe. Guess he wasn’t the only one suffering from the Bubble Wrap and feather pillow syndrome. He sighed. Tension released him so quickly, he propped himself up against the stone wall. Cold leached into his skin.

“I’ll come back and help with the tomatoes after my checkup.”

He would. Something would be checked off his bucket list before the radiation ate him. Turning right, he headed toward the elevator that would take him to the infirmary a couple levels above. Of course, he’d have to write a bucket list first.

He gasped for breath and fell to his knees. Plowing his fingers through his hair, he squeezed his scalp.

Oh God. He was dying. Really dying. The doctors and nurses couldn’t fix him. He’d served enough MREs to the patients to know…to know his future.

The organ slushie oozing from his body.

Well, if he had to die, he’d take those idiots that exposed him with him. Manny pushed to his feet. And he’d keep his job for as long as he could, too. He’d get help from someone who needed to find his place now that his grandfather had died.

By-passing the elevator, he turned down the ramp leading toward the living areas. If it was the last thing he did, he’d help Justin Quartermain find his purpose.

Linda Andrews lives with her husband and three children in Phoenix, Arizona. When she announced to her family that her paranormal romance was to be published, her sister pronounce: "What else would she write? She’s never been normal." All kidding aside, writing has become a surprising passion. So just how did a scientist start to write paranormal romances? What other option is there when you’re married to romantic man and live in a haunted house? If you’ve enjoyed her stories or want to share your own paranormal experience feel free to email the author at www.lindaandrews.net She’d love to hear from you.
View all posts by Linda Andrews →
This entry was posted in Books and tagged Colorado, Dark Hope, mines, Redaction, sequel. Bookmark the permalink.