Things that go Thump in the Dark

There are times when I get to sleep into 5 or 5:30AM.  These days are far between but every once in a while I get lucky. This last Sunday was one of those days. I looked at the clock and decided to snuggle against my hubby’s back when I heard a thump. A very loud thump.

Then there was a conversation between the cats and the dogs.

You know the kind, the one that leaves scratches on the dog’s nose and slobber on the cats.

Stepping into my slippers, I shuffled into the living areas to feed the animals and see what all the fuss was about.

Bear lay on his bed diligently licking the cat dish that fell off the entertainment unit and onto his bed. Gifts from heaven, he said, holding the dish between his paws. And he no longer likes having his picture taken as the cats have told them the photos are for missing dog posters. 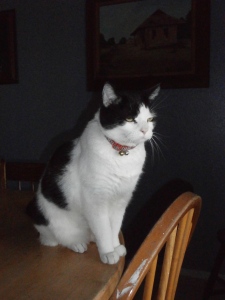 Fat Charlie saw nothing, heard nothing, didn’t know nothing happened but he was sure the dog was involved.

Shadow came out from under the end table to verify that the dog was involved, but didn’t look at the other cats.

Cyanide for once was not at fault. He was very adamant that he wouldn’t bother getting on the top of the entertainment unit let alone push a dish off.  He doesn’t eat the wet stuff, but it did look good on the dog. 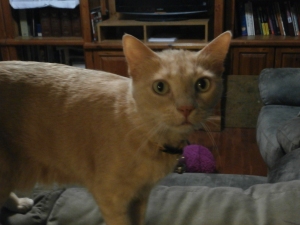 Ms. Peaches is in the know on everything that happens in the house. Her favorite place to hang out is on the entertainment unit which is where her food happens to be. The very place the food was.

And while she may seem to be the impatient one waiting for her food to be served. It was Fat Charlie who left the paw tracks behind, embedded in cat food, no doubt. Of course, he got off scot-free as the dog cleaned up after him.

Then I fed the cats and took the dog for a walk.

Linda Andrews lives with her husband and three children in Phoenix, Arizona. When she announced to her family that her paranormal romance was to be published, her sister pronounce: "What else would she write? She’s never been normal." All kidding aside, writing has become a surprising passion. So just how did a scientist start to write paranormal romances? What other option is there when you’re married to romantic man and live in a haunted house? If you’ve enjoyed her stories or want to share your own paranormal experience feel free to email the author at www.lindaandrews.net She’d love to hear from you.
View all posts by Linda Andrews →
This entry was posted in Life Observations and tagged cats, dark, dogs, sleeping in, sounds. Bookmark the permalink.

2 Responses to Things that go Thump in the Dark