Given that this was our first Comicon, I didn’t really understand how these photo ops things worked. So I kinda, sorta didn’t allocate enough time between photo sessions. I actually thought the time on the ticket was when you were supposed to appear. Boy was I wrong. Everyone lines up and that is the order in which you are taken.

This conventions big draw was the cast of Babylon 5 and John Barrowman. Ooooh, John Barrowman. Yep, I bought 2 tickets to see him, not realizing 4 people can be in one photo. As getting a refund was iffy, we decided to take two pictures. Problem was, Captain Jack’s line was hideously long and I had another photo op 15 minutes after his started. The comic con volunteers were most helpful and offered to pull us out of one line and put us in another so we would get our photos. Instead we waited in line for 2 hours and were first (after the all volunteers and staff folks snuck in). Mr. Barrowman was very cool and said he’d do just about anything (except kiss) as long as we thought of it. So our first photo was serious.

And then this happened. 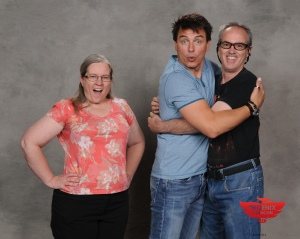 After we collected our stuff from one line, the staff fit us in the next line and we managed to get our photo taken with Bill Mumy. Lost in Space was hubby’s first intro to SciFi and says it was on when TV was good.

We were able to attend a few lectures before our next photo op. So we heard things on engines for space travel by ASU professors, Josh Whedon’s career, and a rather heated discussion about Sherlock versus Elementary. But I loved that Benedict Cumberbatch pinned the producers of Sherlock into filming another 6 episodes before the series ends.  We also went to a bit of a stage performance by the Longshots, a zombapoc survival group.

We then returned to the line to get our photo taken with Wil Wheaton. We were two away and had already handed over my belongings when the fire alarm went off.  The entire 3 story convention center had to evacuate. We were in the basement and dutifully headed toward the exit. The couple behind us had set their kids, 8-10 years old, to the side as they didn’t want their picture taken. The kids were swept up first and were quite upset because of the separation. John Barrowman, who was holding open one door leading to the stairway, had them stand between  him and a staff member until the parents caught up with them. Thankfully, they were not too far behind us. But boy, I would not like to experience those 10 minutes of terror.

We all evacuated across the street and hubby and I ended up standing next to the Grudge girl while the fire department showed up and gave the all clear. Never did find out what caused it, but rumor said it was a kitchen fire.

Back inside we went and took our place at the front of the line. John Barrowman and Wil Wheaton were messing around while we waited for the folks to return who were in front of us. Then pictures resumed. Wil thanked us for returning and my hubby asked him if he really tasted like chicken. He said no he didn’t but Dr. Parish did:-) 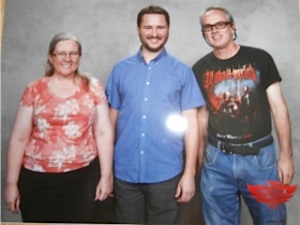 We will be going next year, but will arrange our photo ops a little better so we can attend far more workshops.

Linda Andrews lives with her husband and three children in Phoenix, Arizona. When she announced to her family that her paranormal romance was to be published, her sister pronounce: "What else would she write? She’s never been normal." All kidding aside, writing has become a surprising passion. So just how did a scientist start to write paranormal romances? What other option is there when you’re married to romantic man and live in a haunted house? If you’ve enjoyed her stories or want to share your own paranormal experience feel free to email the author at www.lindaandrews.net She’d love to hear from you.
View all posts by Linda Andrews →
This entry was posted in Life Observations and tagged Bill Mumy, Captain Jack, John Barrowman, Longshots, Phoenix Comicon, Wil Wheaton, zombie, Zombies. Bookmark the permalink.