The Dragon Hour by Connie Flynn

Connie is a fabulous writer who has branched out into paranormal romances. This time she’s writing about dragons. What could be better than that? 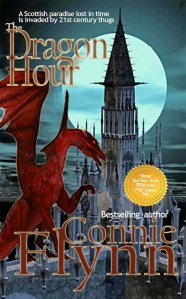 A Scottish paradise lost in time is invaded by 21st century thugs. It was a robbery gone terribly wrong, ending in Luke Slade carrying his wounded cousin through a window of light. Just before the window closes, the killers chase in behind them, trapping them all in 1672.

Caryn McLaughlin rules Lochlorraine and deals daily with a terrible threat. When Luke appears she knows her worries will soon be over. She’s seen his face all her life on a tapestry hanging in her bed chambers. Luke the Dragon Slayer, none other . . . and his duty is clear. What a pity he doesn’t see it that way.

The alarm had sound.
Giving her boot laces a final tug, Caryn tied them, then gave one last look at the image of the man who would come to redeem her village. Color rose in her cheeks as she recalled her girlish fantasies. Sir Lucas would ride up Wizard’s Spire on a great black stallion, cut off the monster’s head, then return to lay it at her feet.
His declarations of love would cause her to swoon, and soon they’d adjourn to their marriage bed where he’d show her the delights bards sang of.
She hurried from her room and toward the stairs. At the main floor, she encountered Ian, who was ascending from the lower regions.
“Caryn,” he called. “That blasted fool Chisholm gathered his soldiers and rode off without waiting for my instructions.”
The Earl of Lochlorraine hurried toward her, his plaid in complete disarray. Tufts of his tawny hair sprouted from his head. Even now, as he skidded to a stop in front of her, he ran his fingers through the strands, creating more untidy cowlicks. But Caryn was accustomed to his lack of concern about personal appearance, and barely noticed his dishevelment. “These men have come from a future time.” He paused to rub his chin and Caryn waited patiently for him to continue. “One or more may hold the knowledge that I need.”
“The needle of your time compass rests on the future?”
“Aye. The years have reached two thousand. Can you imagine? But what excites me more is that finally we’ve lured a future-dweller into the realm. Surely they can impart wonders I have never dreamed about.”
Ian continued speculating about the knowledge so near at hand, but Caryn barely heard him over her disappointment. So this wasn’t the moment of the hero’s return, after all. Sir Lucas would come from the past, not the future.
“Caryn!”
Several seconds passed before Caryn became aware that Ian knew she wasn’t listening. With a mumbled apology, she gave back her attention.
“This knowledge must not be lost. The success of our mission depends on it. The travelers will be frightened and possibly hostile. Go. Keep Chisholm at bay.”
” ‘Tis where I was going,” Caryn said.
And she could tarry no longer. Chisholm’s rashness in battle was well known. More than one traveler had died under his sword.
A new alarm came from the tower. Three again.
“Six travelers!” Caryn exclaimed. “Never have we had so many.”
“A rare opportunity,” Ian agreed. “And I must speak to each of them.”
Caryn gathered up her skirts. “I must hurry.”
“Tell the captain that none of the travelers are to be harmed,” Ian called as Caryn turned and rushed toward the great hall. “Inform him that it is my command.”
Only with Chisholm would she need the power of Ian’s authority, but Caryn was glad enough to have it as she pushed through the heavy castle doors and dashed to the stable. She’d ride her stallion without saddle, saving time, for she feared she’d be too late.
Even as she ran, her mind returned to the dragon slayer and her moment of unseemly lust. A useless fantasy, she thought. A folly, in fact. She’d never accept a man into her bed again. They had such a tiresome way of trying to rule a woman’s life.

Linda Andrews lives with her husband and three children in Phoenix, Arizona. When she announced to her family that her paranormal romance was to be published, her sister pronounce: "What else would she write? She’s never been normal." All kidding aside, writing has become a surprising passion. So just how did a scientist start to write paranormal romances? What other option is there when you’re married to romantic man and live in a haunted house? If you’ve enjoyed her stories or want to share your own paranormal experience feel free to email the author at www.lindaandrews.net She’d love to hear from you.
View all posts by Linda Andrews →
This entry was posted in Books and tagged Connie Flynn, excerpt, guest post, Paranormal Romance, the dragon hour. Bookmark the permalink.