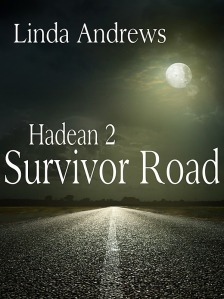 My wife should kill someone more often. Brent Zindell stuffed the tongue of his belt through the loop on his trousers. A pleasant hum spread through his body. They’d made love two times in the last half hour, twice their normal weekly allotment. But more than that, her bashing in the face of her coworker had drawn them closer together, a force united. Just like they’d been after their daughter Cheyenne’s rape.

Especially after Brent had killed the rapist’s parents and made certain the criminal would be incarcerated for the next two decades.

Toes sinking into the plush beige carpeting, he sauntered past the rumpled king-sized bed and stopped by his dresser. Tucking his wallet into his trouser pocket, he fingered the oily rubberband wrapped around a tin of mints. Such an ordinary object, but it had concealed any evidence he tampered with a car’s brakes.

Had his wife taken a trophy?

Of course, a paper shredder would be too obvious.

His wife, Kelly, strolled out of the bathroom. Blond highlighted her chestnut hair. Blush and foundation concealed the bruise swelling her right cheek. Shiny pink lips blew on the scarlet nails perfuming the air with a chemical smell. Her eyes shone as she approached, lush hips swaying inside her black yoga pants. “I’m almost sorry to share you with the neighbors.”

Brent held out his hand. When she looked at him like that, he was no longer a five foot six middle-aged bureaucrat, but a six foot tall superhero. “But you love Ellen’s pizza.”

Kelly slid her palm across his. “I love you more.”

“And I love you.” After today, the words were sweeter, filled with an abyss of meaning. Skimming past her hand and up her forearm, he pulled his wife against his chest.

She rested her head on his shoulder and buried her nose in his neck. “I love how you smell.”

He tilted his head, giving her access to his neck. “We shared the same soap.”

His hands skimmed her sides to rest on her waist. She was so perfect. The exact amount a man needed so he didn’t cut himself on sharp bones.

“It smells different on you.”

So she’d said. He recognized the symptoms. His senses had been heightened after his first kill, too. He detected the peppermint scent of her toothpaste and the richness of her building arousal. He swatted her on the left butt check. “Come on, woman. I need my energy if you keep that up.”

Her chuckle nearly matched his pulse. “That you will. I have plans for you. Later.”

Later, he could do. He brushed his mouth across hers.

Would this one drop its payload on their neighborhood? Would his family be injured? Staring at the popcorn ceiling, he set her away from him. A second passed. Two. Five. At ten, he released the breath he hadn’t realized he’d been holding. He hoped the military was restoring order.

Not that things should return to the way they were.

But a little discipline, respect for authority, and obedience to the law would soon return society to the way it should have been.

He saw that, now.

After giving his hand one final squeeze, Kelly sashayed to her black ballerina flats and stepped into her shoes. She spun on her heel. “What do you think? Post-crazy chic? Or everyday casual?”

“I think you look beautiful.” And her choice of shoe minimized the inch she had over him. Tugging on his socks, he worked his foot into his shoes making certain the insert didn’t roll.

She grinned at him and dipped into a shallow curtsey. “Thank you, kind sir. But I’m still not giving you my pepperoni.”

His lips curled into a matching smile. “Your daughter isn’t so stingy.”

“My daughter thinks she’s a vegetarian, even though she loves to eat steak.” Kelly flipped her hair over her shoulder, wiggled her lush bottom, then skipped to his side.

“I believe that’s because she’s complex.” At least, that was her explanation the last time Cheyenne dived into a nine ounce filet mignon. Brent didn’t care as long as she ate. For months after her rape, she’d barely moved, let alone touched food. Sweat blistered his forehead.

Kelly hooked her arm through his. “Hey, now. She’s okay. You saw her for yourself just forty minutes ago.”

Yes, he had. But he’d also seen something else, something his normally observant wife had missed. “She’d been scared though.”

“I’m sure that went away as soon as she saw us. Saw you.” Kelly tugged him through the double doors leading into the hallway. “I knew you could keep me safe. And she knows the same thing.”

Across from them, band stickers decorated their daughter’s closed door. The cloying stench of strawberry incense mingled with the scent of fabric starch emanating from his wife’s craft room on their left. Turning right, they hustled down the short hall, veered left at the formal dining room clipping the corner of the living room, and aimed for the front door.

“Those girls are going to need you, too.”

He twisted the knob. “Girls?”

Cheyenne’s friend Raine had the black lined eyes of a seventy year old in a seventeen year old’s body. Brent’s skin prickled whenever she stared at him. He could swear she knew more than she should. But she hadn’t caved when other teenagers would have. She’d stuck by Cheyenne, defending her, wearing bruises from the fights she’d been in, defending his daughter’s reputation.

“The Robelski girls, Ellen and Rosa.” Kelly snatched a pink umbrella from the hook mounted on the wall. The ribbon emblem marked his wife’s participation in the three day run to raise money for breast cancer. She unfurled the umbrella with a flourish, then held it over both their heads.

Rain pelted the walkway and barreled down the cracks in the driveway. Stray sun rays pierced the black clouds, not having the sense to stay out of the storm.  Smoke laced the pervading odor of wet asphalt.

Brent wrapped his arm around his wife, turning his head to fill his senses with her familiar scent.  “I’m sure Ellen and Rosa will turn to their father for guidance.”

Paul Robelski was one crafty predator, who always seemed to be several steps ahead of everyone. It was what made him a successful defense attorney, a formidable chess opponent, and a dominating conversationalist. The man could turn the tables on anything and anyone.

There’d been times, Brent would have sworn the sky was green if Robelski had said so first.

“I don’t think their parents are home.” Kelly jumped the clots of garbage in the gutters. Her flats splashed at the edge of the growing puddles. “Grace mentioned heading north to say her goodbyes to her mother and then arranging the funeral.”

Brent shifted his wife’s hand so the bigger side of the umbrella protected her. Moisture pattered his shirt sleeve and wicked across the fabric. With Robelski out of the picture, the girls would need some guidance. Except… “I’m sure Paul’s plan will work until the National Guard restores order.”

He hadn’t seen any soldiers while driving home from his wife’s work. Even the police, sheriff’s deputies, and firemen had been scarce.

His wife’s shoulder brushed his. “They’ll need your expertise.”

“I ride herd on a bunch of social workers, not plan offenses against a crazed horde.”

Kelly stumbled when her hard-soled shoes slipped on a patch of oil. “I know, I depend upon you.”

Catching her before her knee hit the black top, Brent helped her regain her footing. Anticipation unfurled inside his gut. He had successfully delivered justice to over a dozen people. Even the cops with their high-tech forensics hadn’t linked all his kills to him. Maybe…

A gate slammed on the side of the Robelski home, then bounced open. The green trash bin glinted in the gray light. Two feet propped the lid open.  He didn’t know who had killed the guard, but he’d had help taking out the garbage. “Ellen has a friend with her. Andrew, I think it was. He seems capable.”

And there had been a look in the man’s eyes. A predatory look.

The base of Brent’s spine tingled in warning.

He doubted his wife was the only one who’d bagged a crazy today, especially since Andrew had smelled of gunpowder and had carried a pistol with ease.

Kelly snorted. “Ellen has horrible taste in men. Just look at her ex-husband.”

True. Alan Duncan was a real piece of work. Brent guided his wife around a puddle in the driveway. The shower tapered off into a mist. Over the garage, the security lights blinked on, bathing him in golden light.

“They need you, dear.” Stooping, his wife picked up a silver key from the rubble of a garden gnome. “Without the parents, it’s up to you to keep us all safe.”

She dropped the house key into his trouser pocket then stroked his leg.

He had kept his wife and daughter safe. Brent squared his shoulders as they turned up the walkway to the house.  “Why don’t we see what happens, first?”

He’d observe Andy and the geeky kid Rosa had brought home. If things didn’t work out the way they should, he could begin a takeover. Quietly, of course. Shouldn’t Ellen’s first concern be her young, vulnerable children? Shouldn’t Rosa be using her science knowledge to better use? And his daughter would keep Raine busy. He pressed the door bell. The chimes rang deep inside the sprawling ranch.

As for Andy and the other guy… There were plenty of empty garbage bins up and down the street.

Linda Andrews lives with her husband and three children in Phoenix, Arizona. When she announced to her family that her paranormal romance was to be published, her sister pronounce: "What else would she write? She’s never been normal." All kidding aside, writing has become a surprising passion. So just how did a scientist start to write paranormal romances? What other option is there when you’re married to romantic man and live in a haunted house? If you’ve enjoyed her stories or want to share your own paranormal experience feel free to email the author at www.lindaandrews.net She’d love to hear from you.
View all posts by Linda Andrews →
This entry was posted in Books and tagged apocalyptic book, chapter 3, free read, GMO, Hadean, sequel. Bookmark the permalink.