One of the worst parts about owning pets is saying goodbye. I’ll be the first to admit that I put off that final trip to the vet, hoping and praying for a miracle that never comes. But there are times when that decision is taken out of our hands.

One of our cats, Fat Charlie died at 1130PM Wednesday night. He’d been paying with his brother, stopped and fell over. My son ran to wake me to tell me he was breathing funny. A couple minutes later and I walked into him during a grand mal seizure. By the time I made it to the computer to look up a vet that was still open, he’d stopped breathing. My son and daughter tried CPR on him but it didn’t do any good. 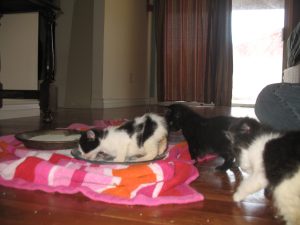 He was a very smart kitty. I found him and his 3 brothers after a pretty nasty depredation by the coyotes of the feral cat population. They were covered in fleas and had been alone for a while. We took them to the vets and washed them in flea soap, then I was up every couple of hours to feed the litter. He showed his bothers how to eat, how to use the litter box and how to meow. They were only 1 1/2 weeks old. 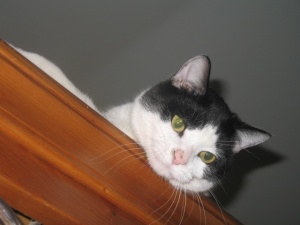 As he got older, he was quite the explorer and like to lounge atop the entertainment unit 6 1/2 feet off the ground. He stood his ground when facing down the dog, although he didn’t always win. And he made a wonderful alarm clock, wailing like a siren in case I even thought of over sleeping.

We only had him for 5 years, far too short for a cat. I will miss him and need another tissue. 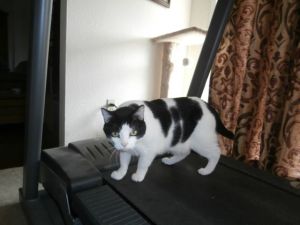 I’m on the treadmill for hours a day and still my spots keep getting bigger!

Linda Andrews lives with her husband and three children in Phoenix, Arizona. When she announced to her family that her paranormal romance was to be published, her sister pronounce: "What else would she write? She’s never been normal." All kidding aside, writing has become a surprising passion. So just how did a scientist start to write paranormal romances? What other option is there when you’re married to romantic man and live in a haunted house? If you’ve enjoyed her stories or want to share your own paranormal experience feel free to email the author at www.lindaandrews.net She’d love to hear from you.
View all posts by Linda Andrews →
This entry was posted in Life Observations and tagged Fat Charlie, Saying goodbye. Bookmark the permalink.

2 Responses to Goodbye to You