Thanks for your presence

About 18 years ago, my husband heard a soft meow while he was at work. The warehouse butted against a railroad track and an empty patch of ground where feral cats kept the rat and mouse populations down. Deciding to check out the meow, my husband found two kittens— a black fluff ball and a gray fluff ball. He saved them from being crushed by the forklift and while we gave one to his mother, we kept one he named Shadow. 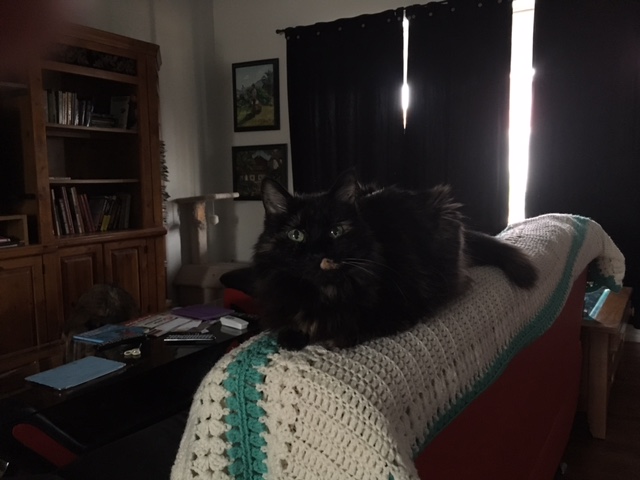 Shadow viewed my husband as her personal property and while she had nothing to do with the dogs in our house, she had no difficulty letting me know I was an interloper. Thankfully, she weighed next to nothing so I just moved her out of the way.

Moving into our current house was traumatic and the addition of a new kitten didn’t make it better. She spent the next four years under our bed, coming out to do her business and to sleep between me and my husband.

Later, she took to sleeping on my hip then digging her nails into me, if I moved. She was an evil cat, at least to me, but she was my evil cat, too. Even letting me pet her and sleeping on my lap (maybe to keep me from sitting too close to the hubbinator) whose lap she preferred.

But she was getting old in years and on Saturday she stopped eating and drinking. On Sunday, she passed while sleeping on her favorite bed, tucked in her favorite blanket, under the Christmas tree.

The hardest part of owning a pet is saying goodbye. But at least she’ll live on in our memories.

Linda Andrews lives with her husband and three children in Phoenix, Arizona. When she announced to her family that her paranormal romance was to be published, her sister pronounce: "What else would she write? She’s never been normal." All kidding aside, writing has become a surprising passion. So just how did a scientist start to write paranormal romances? What other option is there when you’re married to romantic man and live in a haunted house? If you’ve enjoyed her stories or want to share your own paranormal experience feel free to email the author at www.lindaandrews.net She’d love to hear from you.
View all posts by Linda Andrews →
This entry was posted in Life Observations and tagged cats, death, pets. Bookmark the permalink.