Building a World: These Divided States: High Price to Pay

All books start with an idea. Actually, they’re usually an amalgamation of several ideas. Take High Price to Pay. It started with the idea that legalizing some drugs helped to make certain states solvent and became coupled with the idea that all drugs should be legalized since regulation is bad.

And so a story was born.

But wait, there’s more. Because doing drugs is a sin, there had to be a punishment for doing drugs and the social consequences of doing drugs couldn’t be ignored. Which left me with the following foundation:

After the 2nd Great(est) Depression of 2022, all drugs were made legal to pay off the national debt. But drug use cost more than money. Certain civil liberties were given up: 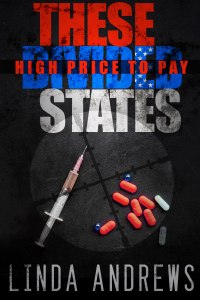 Addicts had no right to life, police couldn’t waste money investigating their deaths, no trail for an erasure warrant to be issued

Addicts could be held without bail if suspected of a crime

Addicts had three chances to get sober before being stripped of their rights permanently.

Preorder at 80% off. Warning: this book contains graphic violence, vulgar language, and situations sure to offend nearly everyone.

Linda Andrews lives with her husband and three children in Phoenix, Arizona. When she announced to her family that her paranormal romance was to be published, her sister pronounce: "What else would she write? She’s never been normal." All kidding aside, writing has become a surprising passion. So just how did a scientist start to write paranormal romances? What other option is there when you’re married to romantic man and live in a haunted house? If you’ve enjoyed her stories or want to share your own paranormal experience feel free to email the author at www.lindaandrews.net She’d love to hear from you.
View all posts by Linda Andrews →
This entry was posted in Books, Writing and tagged debt, drug use, great depression, high price to pay, legalized drugs, these divided state. Bookmark the permalink.