The Fabulous Sally Berneathy talks about her Irish Roots

Thanks Sally for joining me today. I hope everyone enjoys the post. Sally will be around all day and one person who leaves a comment will win a ecopy of one of Sally’s books.

Happy St. Patrick’s Day! Today, everybody is a little bit Irish, and the Irish are well known tellers of stories and spinners of yarns.

My grandfather, Hezekiah “Doc” Berneathy, was a red-headed, red-bearded Irishman who definitely had the gift of gab. He lived in Louisiana in the late 1800s when political rallies were a major form of entertainment. Granddad had no desire to be a politician, but he did love to have an audience for his stories. When a political rally was planned, Granddad often drove his flat-bed wagon pulled by a team of mules to the back of the rallying area. As the crowd began to gather, Granddad would stand on the wagon bed and begin telling stories and spinning yarns. When the political speaker arrived, he just had to wait until Granddad finished with the crowd.

I grew up in a family of story-tellers. At night when I went to bed, I got a bedtime story instead of a lullaby. That was a very good thing because everyone in my family had the singing voice of a donkey with bronchitis.

But they could tell stories! We lived next door to my aunt and uncle, and on summer evenings we’d sit outside under the stars while the adults tried to outdo each other with their stories. I just sat there and listened in delight.

Many of the stories were supposedly true, but with my family, you never knew for sure!

One of my favorites, which my dad swore was true, involves our well-known love of dogs.

In 1898 when my dad was six years old, the family followed the lure of land to southeastern Oklahoma where Granddad rapidly established himself as the local dispenser of justice. He concluded marriage ceremonies with the admonition: “What God and Doc Berneathy has joined together, let no man put asunder.”

When my father was eleven years old one of the neighbor men shot and killed his dog. “I was too old to cry,” Daddy said, “old enough to get justice for my dog.” He took his .22 rifle, hid along a route he knew the neighbor would take, ambushed him and shot him.

The man lived…or, as Daddy put it, “Old coot was too mean to die.”

Shoulder bandaged, the old coot marched into town to complain to the self-appointed law. “Your son nearly killed me!”

Granddad stroked his red beard and considered the man for a few minutes, no doubt pondering the legalities of the situation…the legalities according to “Doc” Berneathy. Then he rendered his verdict. “You killed his dog. What did you expect? Just be glad my son wasn’t a better shot.”  Case closed.

The moral, Daddy said, “Do not mess with the Berneathy dogs.”

I feel very lucky that we have computers so I can write down my stories, so I can write stories that last for 300 pages. It would take a lot of starry evenings to tell a whole book!

I like to tell stories for the sheer delight of the story itself, but I’ve also found them to be therapeutic. In my books, I can fall in love with a hunky detective. I can solve a murder through brilliant deductive logic. I can kill my ex husband over and over and never have to go to prison! My books are total fiction. Even though I’ve killed off the evil ex-husband a number of times, the real one is still alive. For the moment.

Do you have a favorite family story? True, maybe true or totally fiction…please share!

For more on Sally visit her website at www.sallyberneathy.com 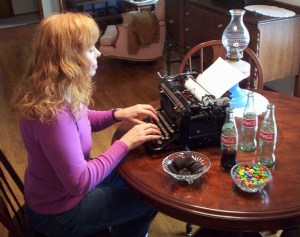 And here is some information about her books.

Television reporter, Allison Prescott, is covering the story of the latest murder among the homeless people living on the streets of Oklahoma City when she spots a derelict who looks anything but homeless. He’s too alert, too well-muscled…too sexy. Who is this man and why is he pretending to be one of the street people? Can he be the murderer? This may be the story she needs to save her job, get her a much-needed raise and give her the money she needs to fight her ex-husband for custody of their daughter. With the single-minded determination of a mother battling for her child, she sets out to discover the delectable hunk’s real identity. Then she finds herself attracted to him…to a homeless bum.

Brad Malone, undercover cop, is trying to blend with the homeless community and find a killer before somebody else dies. He’s been a cop for thirteen years. Dealing with murder is nothing new to him. However, when a nosy reporter begins following him everywhere, threatening to blow his cover and compromise his investigation, he finds himself in way over his head and his heart.

Lindsay Powell’s only secret is the recipe for her chocolate chip cookies, but she is surrounded by neighbors with deadly secrets. Suddenly Lindsay’s life spirals downward into complete chaos and a near-deadly bout with the chocolate she loves. If not for the stray cat who bullied his way into her home, Lindsay would be dead.

Her best friend and co-worker, Paula, dyes her blond hair brown, hides from everybody and insists on always having an emergency exit from any room. Secrets from Paula’s past have come back to put lives in jeopardy.

Determined to help Paula and save her own life, Lindsay enlists the reluctant aid of another neighbor, Fred, an OCD computer nerd. In spite of his mundane existence, Fred possesses tidbits of knowledge about such things as hidden microphones, guns and the inside of maximum security prisons.

Linda Andrews lives with her husband and three children in Phoenix, Arizona. When she announced to her family that her paranormal romance was to be published, her sister pronounce: "What else would she write? She’s never been normal." All kidding aside, writing has become a surprising passion. So just how did a scientist start to write paranormal romances? What other option is there when you’re married to romantic man and live in a haunted house? If you’ve enjoyed her stories or want to share your own paranormal experience feel free to email the author at www.lindaandrews.net She’d love to hear from you.
View all posts by Linda Andrews →
This entry was posted in Books, Uncategorized and tagged Contest, giveaway, irish roots, romantic suspense, Sally Berneathy, St Patrick's Day. Bookmark the permalink.